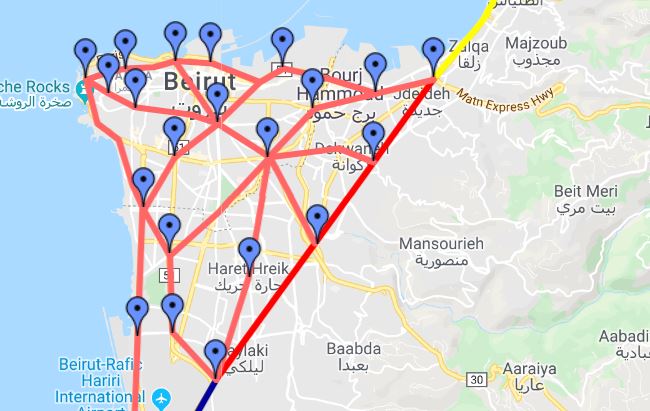 Proposal for a Lebanese Coastal Metro

Some serious research needs to be undertaken to consider the possibility of implementing a metro (subway) system to Lebanon, and what only seems feasible in terms of topology is a coastal metro system running from Tyr in the South to Tripoli in the North. This metro system would have many possibilities and advantages. I think with the increasing gas prices, the failure of public transportation (not to mention awful hygienic conditions), a metro system would have the following advantages:

1- It would generate jobs on many levels from the construction industry to fabrication and material, accounting, finance, business, etc…
2- It would alleviate much of the congestion that plagues Lebanese cities.
3- It will stimulate the economy
4- It will connect the whole of the Lebanese coast, enhancing social integration.

The Lebanese industry though does not have the know how in terms of the design and the implementation of a project on this scale. I think that though it could be subcontracted to any of the countries that have extensive experience in this domain. (I prefer Russia, and if anyone has seen the Moscow Metro system would agree).

A project like this is not really far fetched. The following preliminary proposal of the possible routes that this subway system can take is a general outlook on the Lebanese landscape and major towns and cities. Further research should be conducted on what the best connections would be when it comes to running the system within the larger city of Beirut. The topography of the country, and specific all of the city of Beirut should be carefully considered, as you cannot run a train uphill over a certain slope,

Below is the preliminary Proposed Plan for the Lines and Stations. The total distance from North to South, not counting the peripheral lines is about 165 kilometers. This is really not that much considering that the CityRail that serves NSW in Australia is over 2000 km in length, and the Berlin system alone is about 145 km in length. In comparison, this is a small project.